Kangchenjunga is the third highest mountain in the world with an elevation of 8,586 m (28,169 ft) and located along the India-Nepal border in the Himalayas. Kangchenjunga is also the name of the section of the Himalayas and means "The Five Treasures of Snows", as it contains five peaks, four of them over 8,450 m (27,720 ft). The treasures represent the five repositories of God, which are gold, silver, gems, grain, and holy books. Kumbhakarna(Janu), Ramtang, Mera, Dhango, Sharphu, Khamchen Yalung Kang, Kiranti Chuli, Drohmo Peak and Domo peaks are the attraction parts after Kanchenjunga.

Three of the five peaks main, central, and south are on the bord [Kanchenjunga] er of North Sikkim in India and Taplejung District of Nepal, while the other two are completely in Taplejung District. The Kangchenjunga Himal includes twelve more peaks over 7,000 m (23,000 ft).

Until 1852, Kangchenjunga was assumed to be the highest mountain in the world, but calculations made by the Great Trigonometric Survey of India in 1849 came to the conclusion that Mount Everest (known as Peak XV at the time) was the highest and Kangchenjunga the third highest. Kangchenjunga was first climbed on May 25, 1955 by Joe Brown and George Band, who were part of a British expedition. The British expedition honoured the beliefs of the Sikkimese, who hold the summit sacred, by stopping a few feet short of the actual summit. Most successful summit parties since then have followed this tradition.
Elevation: 28,169 feet (8,586 meters)
Location: Nepal/India, Asia
First Ascent: George Band, Joe Brown (UK), May 25, 1955
Note:- The name translates “Five Treasures of Snow,” referring to Kangchenjunga’s five peaks. The Tibetan words are: Kang (Snow) chen (Big) dzö (Treasury) nga (Five). The five treasures are Gold, Silver, Precious Stones, Grain, and Holy Scriptures.
Kangchenjunga means "five treasures of the greatest snow"
Kangchenjunga trekking route is one of the best regions for those visitors who want to experience more of Nepal and get away from the well known areas. You will be walking along remote trails where few foreigners venture. The region is blessed by the world's third highest peak Kangchenjunga (8586m), the jewel of the Eastern Himalayas and is located on the border of Nepal India and Tibet.

In addition to the main peak, four subsidiary summits exceed 8000m, the most important being Kangchenjunga West, also known as Yalung Kang (8,505m). Of some twenty peaks exceeding 7,000m, the highest are Kambachen (7,903m), Kumbhakarna(Jannu) (7,710m), Jongsong (7,483m), Kabru(7,353m), Tent Peak (7,365m) and the Twins (7,350m).
Trekking this route is a chance to venture into a rarely visited, un spoilt region of Nepal where the hillsides are still densely forested and the need to be self-sufficient is essential. Above the entire exhibition you are presented with the abundance of majestic nature and a whole lot more opportunities to explore and enjoy the traditional culture of the Kirat Rai and Kirat Limbu native people of this region.

The trails in this region follow the ancient paths which meander along scenic riverbanks, intricately terraced fields and forests connecting the picturesque hamlets and mountain villages. You will encounter many eye catching rhododendron-filled forests which have numerous varieties of blossoms which flower in spring.

Upon arrival in Kathmandu after the unforgettable experience of flying across the Himalayas you will be welcome at the airport by our staff. You will drop to the hotel and preparation for trek and enjoy welcome dinner in the evening.

We take a 39 minute flight to Suketaar or we may take a two day drive to Phungling bazaar beautiful hill state of eastern Nepal.

We take a 3 hours walk to reach Phurumbu through homelands of Kirat Limbu ethnic group.The name of the most places are derived from the Limbu ethic language.We take a chance to peek into the lifestyle and culture of Limbu people and will try to interact with the local people. The trail offers the magnificent views of Khumbu himal in the southeast and in the north Chamlang and Chhoyang himal.

We descent down till Tamur river and the trail continues through the ridges and gorges of Tamur river to reach Chirwa.The area is inhabitated by the Limbu peoples, the descendants of the Kirati warriors who ruled Nepal at the dawn of Nepalese history. More than 90 % of the local people depends on the farming and they follow their unique Kirat religion. Cardamon, produced locally, is exported and is famous internationally. Languor, porcupine and varieties of birds on the way gives you the rare opportunity to see these wild animals live.

The trail follows along the Arun River passing the Limbu communities which takes 5-6 hours.The pastureland ethnic villages and wild birds accompany the journey. We cross the Simbuwa Khola, a river formed by the Yalung Glacier. We climb over another ridge to join the GhunsaKhola valley.

We follow a steep and narrow trail up-river. From the high spots there are wonderful views of the GhunsaKhola below. The path descends steeply and we arrive at the mountain-side village of Amjilassa. From Amjilassa we get the beautiful views of Syarphu III, Syarphu II, and Khangla range.

We gently climb up from here following rhododendron, oak and pine forest. The trail follows the left side of the Ghunsa River. On the east we get to see the magnificent views of Bokthok, Milanginla, Sininola,Khabur peak, and Khole peak. Bhotia people of Tibetan origin inhabit these places who are supposed to have immigrated to this place 300 years ago. They rear yaks, sheep and out of the wool they prepare carpets and trade them to make their living.Ghunsa is the best place for the panoramic views of Kanchanjunga range, Kumbhakarna, Khambachen and Khabur, Khole peak in the north east while Sharphu I, Sharphu II and Sharphu III and for acclimatization. It is considered as one of the important place for the development of Tibetan Buddhism.

Ghunsa to Khambachen(4220m) follows the  easy trail along the Ghunsa river. We got to be cautious for acclimatization considering the altitude we have reached. We get the all round views of Kanchanjunga ( 8586m-3rd highest peak in the world), Khambachen(6903m) and  Kumbhakarna(7710m), Nepal peak (7168m) ,Kirat Chuli(7365m), Mera (6345m) in the east and Sherphu I, II,III,IV,and Nukchu , Ramtang peak in the northwest direction. Khambachen is one of the best area for the magnificent views of high peaks. A herd of 7-35 blue sheeps are frequently encountered all along the way. The friendly Sherpa people are the main occupants of the region with their unique culture and lifestyle.

The relatively leveled trail along the Ghunsa river provides the magnificent views of Kanchanjunga peak(3rd highest peak of the world).We also get the close views of Kiratchuli, Pyramid peak,Nepal peak, The twins.and Pathivara to the east and to the west Dango, Tinjung, Drohmo east and west. The serene and tranquil Kanchanjunga Glacier comes next on our trail and we cross over the beautiful Lhonak Glacier.

It takes 7-8hours walk to descent down to Ghunsa.The easy trail follows the beautiful scenery of Himalayan range.  The descent is enjoyable along with the picturesque views of panoramic mountains and villages.

It takes 7-8hours walk to descent down to Ghunsa.The easy trail follows the beautiful scenery of Himalayan range.  The descent is enjoyable along with the picturesque views of panoramic mountains and villages.

The trip is hard as the trail passes the steep up through the jungle  upto the Sinionla pass(selele-4854m) ,and Milginla pass.At the Siniola top we get the majestic views of  Makalu range and Everest range in the west and Kanchanjunga, Koktang and Rantang range in the east .Then we climb down all the way to Tseram along the rocky mountain.It takes 8-9 hours to reach our next destination.

It takes a 4 hour gentle climb and then relatively leveled trail follows the large meadow where we get to see the blue sheep, yak, sheep, musk deer, Tahr and Pica. To the east of the meadow there is large scale of moraine where blue sheeps are seen resting in the sun.From Koktang we get the closest and excellent views of the towering peak of Kanchenjunga, 3rd highest peak of the world.The place also so suited for the excellent views of Ratang and Kabru peaks.

The trail follows the gentle descent through juniper forest along with the ferns and mosses, till Tseram. The picturesque view of high mountainous peaks and green pine and rhododendron forest makes the journey more enjoyable and relaxing.

We walk across the thick forest of pine trees where we get to see Himalayan black bear on their natural habitat.  Walking in the group is most suggested on this area. This trek takes 4 hours walk. We descent till Simbuwa khola and takes an ascent till Chitre. We see the largely extended pastureland for Chhauri and sheep on our way.

We walk across the Dhupibhanjyang and climbs down through the subtropical forest inhabitated by musk deer, barking deer, and a variety of wild birds.Yamphudin is the multiethnic village inhabitated by Kirat people. It’s the main hub centre for the surrounding area. The people follow the animism and shamanism as a religion. They grow the maize, millet, wheat for their livelihood. We can visit the local market and observe the arts and culture of the local people.

Phunphu is in the lowerland surrounded by green hills. The Kirat limbu people follow the animism and shamanism as their religion and traditional way of living. We can take a chance to observe their traditional lifestyle and traditional houses.

We take a walk across the beautiful villages a small forest and small rivers and stream.  Green paddy fields and local ethnic people lifestyle graps grant the attention.

We pass across the thick sub-tropical forest on 3 hours walk. From Suketaar we can take a one day hike to famous religious place Pathivara, from where you get the beautiful views of Darjeeling, Northern Indian state.

We can fly to Kathmandu in 39 minutes or drive back via scenario roads across the many cities and villages of eastern Nepal. 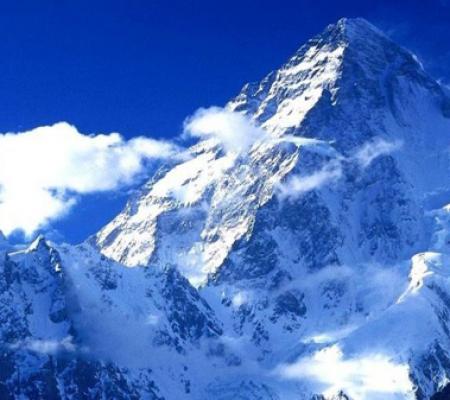 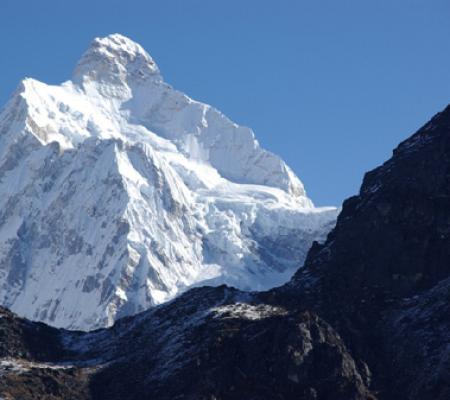 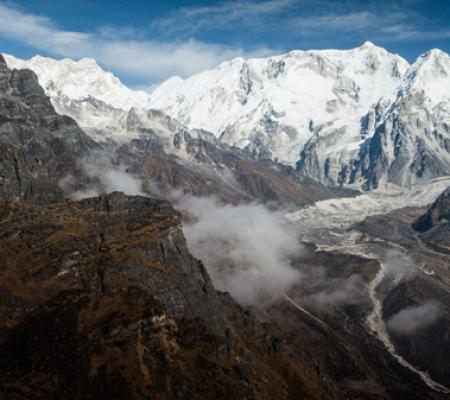 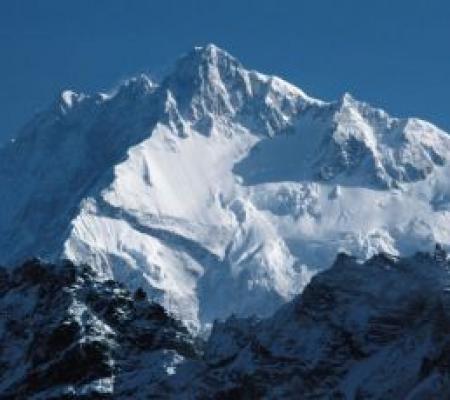 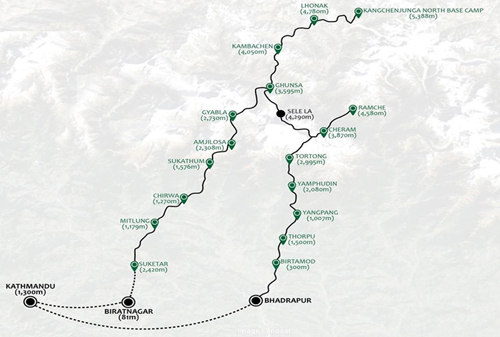 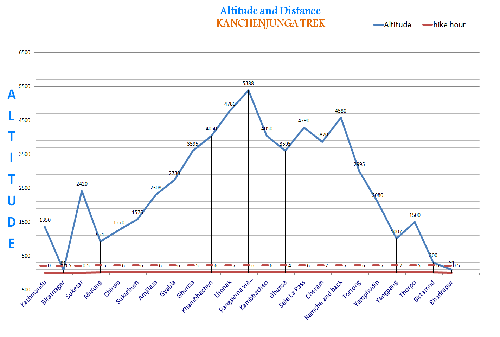